Starting a new hobby or sport can be a challenging and intimidating experience for even the most seasoned athletes. There are new sets of rules to learn, strategies to know, unfamiliar equipment to try out, and crowds to familiarize yourself with. As a Pickleball Beginner, it doesn’t have to be intimidating and scary. Pickleball is one of the few sports that can provide an affordable, relaxed, friendly environment throughout the learning process—if you know how to get started.

Those who are just starting to get interested in the sport are looking at an overgrown field and searching for a path. In this article, I will provide you with that path. By the end, you will know everything you need about the sport that is growing explosively and the steps you need to take in order to become a pickleball professional.

Before we get into the specifics of pickleball, it’s helpful to have an understanding of the origins.  Knowing the history of pickleball will provide a greater appreciation of the game and its evolution.

The game originally received its humble origins in 1976. Joel Pritchard and Bill Bell were simply trying to keep their families entertained. All they had were a few ping pong paddles, a badminton court, and a plastic ball—from there, pickleball was created.

Many who saw the sport as it was then — neighbors, friends, and acquaintances — ended up asking for the pickleball equipment. The creators never envisioned pickleball going public, but it was nonetheless too popular to stay within the family.

The United States Pickleball Association (USAPA) was formed not too many years after the first game was started. In fact, the first official rulebook was published in 1984.

Then, in 2009, the first national tournament was held and attended by over 400 pickleball fans.

In 2015, pickleball was crowned the fastest growing sport in the United States.

Today, there are over 3.3 million pickleball players in the United States and numerous clubs sprouting across the world.

The unique game is extremely accessible and fun for so many of those who try it out.

Where did Pickleball Get Its Name?

It’s true, pickleball is an unusual name for the game—and the name’s origin is just as interesting.

There are actually two competing theories of how the name was created. The first stems from Joel Pritchard’s wife, Joan. She claimed that the name originated from the pickle boat in common rowing crews, where oarsmen were chosen from the leftovers of other boats.

The second theory arises from the fact that the Pritchard’s had a dog named Pickles who loved to chase after the plastic ball and run off with it.

No matter which one you choose, the rules, the court, and the etiquette will end up being the same. The game is played on a badminton-size court (20’ x 44’) with paddles (somewhat) similar to ping pong and a plastic ball that’s very similar to a wiffle ball. The objective is to score more points than your opponent until one side reaches 11 and leads by at least two points.

On top of that, there are several; fundamental rules to that make pickleball unique compared to other racquet and paddle sports.

Similar to tennis, pickleball can be played on either indoor or outdoor courts.  While the rules are the same, each environment has its own challenges and specifics that should be considered.

Most importantly, the actual pickleball balls are different. Indoor balls have fewer, larger holes (approximately 26), compared to outdoor (approximately 40 holes). This is to make the ball lighter and airier, but it also makes it easier to control and hit powerfully.

This change may also impact the equipment you choose to buy for your tournament and recreational matches.

You can also choose between playing singles or doubles. There are a few different rules when there are two additional players on the court. For example, each player on the team gets to serve before the serve switches to the other team. Doubles is best for those who would like a designated partner, appreciate teamwork, or don’t want the excessive court coverage required in singles play.

We’ve mentioned the rules a few times throughout this article so far, but what exactly are the rules to be aware of? Well, there is an entire 73-page handbook on the subject, but for simplicity, let’s summarize the most important pickleball rules for your convenience. The most important rules to know include:

Now that you have a general understanding of how to play pickleball, let’s dive into the things you will need before you take your first steps on the court. Those who are just beginning to play may want to start with less expensive gear to determine what suits them. Once a few hours are spent on the court, however, making your equipment tailored to you can make the game more comfortable, competitive, and overall more enjoyable.

There are dozens of different accessories and practice tools that will help you succeed, which we go over here. But paddles and practice equipment are the most popular purchases for beginners.

The paddle is the most important part of the pickleball equipment. Although the first paddles were wooden (and you can still get wooden paddles) today most paddles are made of composite materials or graphite. The primary considerations when choosing a paddle are weight, shape, and composition.  Finding the paddl in your price range to complement your current playing style is what you’re after.

As mentioned above, there is no one, standard pickleball ball. In fact, there have been 33 pickleball brands that have been approved by the USAPA.

When you are just starting to play, you may just want to start with a few less expensive options. It won’t take long for you to find out which kind you prefer.

Remember to choose the correct indoor or outdoor balls, though! If  you start entering competitions, it is worth figuring out what kind of ball your tournament will be using.

As the saying goes, practice makes perfect. This is no different when it comes to pickleball.

Luckily, there are a plethora of tools to make practicing effective and efficient—all with a sprinkle of fun. Ball machines, ball hoppers, ball tubes, and court targets are all popular accessories used for pickleball practicing.

With these on hand, you’ll be more comfortable with a paddle in your hand than without in no time.

If you are the type of person to fret about what to wear on the court, you’ll be happy to hear that you can push all those worries to the side. Pickleball is pretty easy-going when it comes to what attire is worn on the court; however, there are a few choices to make in order for your game to reach max comfort.

Comfort is especially important when it comes to choosing what shoes you wear on the court. Having good foot equipment can improve your ability to move quickly and prevent injury to joints. With that being said, there’s an increasing variety of shoes that are made “specifically for pickleball.” But any tennis shoe will be great for outdoor play.

Last but not least, you want to be sure that you are taking care of your body on the court. One of the greatest qualities of pickleball is that it is pretty easy on your joints and does not involve too much colliding or diving.  You may need protective eyewear, arm or leg braces, gloves, or other materials to ensure your safety. It is best practice to purchase these before hitting the court so you can get used to how they may affect your performance.

Now that you know the rules and have the right equipment, you’re almost ready to get out there and top the pickleball charts. There is just one more thing to do: prepare physically. Just like in any sport, stretching and warming up properly before each match and taking care of your body afterward are both equally important aspects of a successful pickleball experience.

Putting work into your flexibility, mobility, strength, and endurance may not be the most fun part of preparing for pickleball, but it can definitely pay off the most. Even casual, recreational players can participate in basic exercises that will win points in the long run. One of the most popular ways to condition for pickleball is doing yoga; however, cross-training is the most ideal way to condition your body for the sport.

Assessing your physical condition, warming up your knees, and stretching are all essential steps to having an injury-free match. We recommend completing a dynamic warmup (or a warmup that consists of continuous movement) that prepares the body for a rise in internal temperature and physical activity.

When it comes to cooling down after practice or matches, however, static (or no movement) is the way to go. Static stretching after exercise can help you stay limber and promote blood flow, which makes for a quicker and less painful return to the court. Be sure to stretch your key muscles and joints, including hamstrings, quads, shoulders, and triceps.

While the most effective way to learn how to play pickleball may just be going out and learning by trial and error, it never hurts to hear from those who started in your position and excelled. Here are a few tips from an experienced pickleball player:

Congratulations! You now know the basics of pickleball and how to take your first steps to become a successful player. We’ve presented you with the path forward. All that is left for you to do is get out onto a court near you and start playing.

What You Need to Know About Your Pickleball Recovery
Pickleball Stacking and Switching: A Beginner's Guide
Pickleball Accessories that are a Must-Have for Beginners 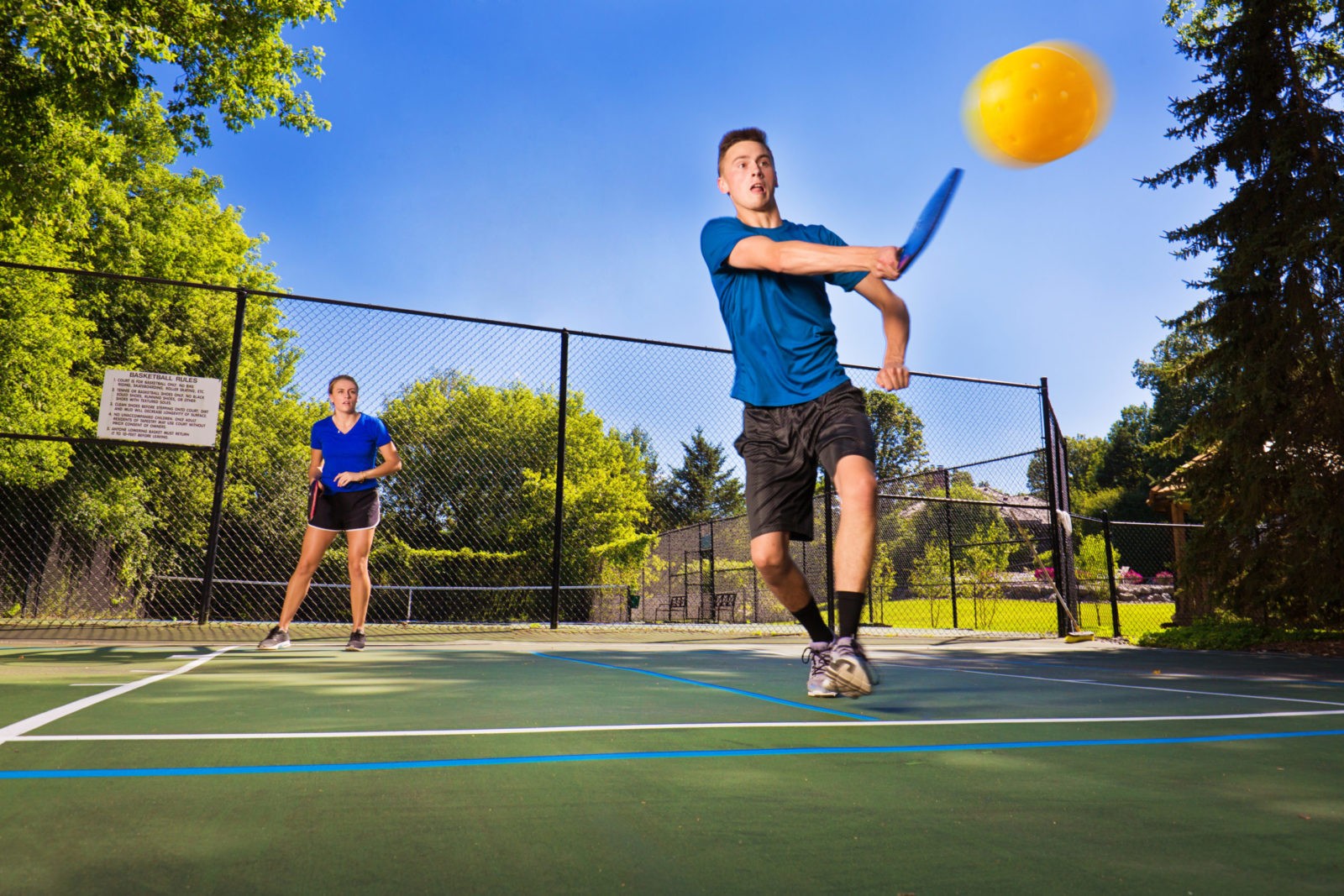 Pickleball is the perfect way to get out and be active. Learn the difference between playing singles and doubles. | Pickleball Doubles